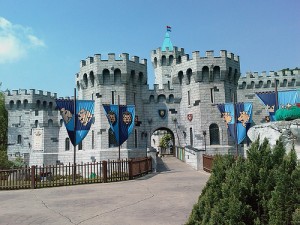 Last week I was in Windsor for a gathering of leaders of some of the churches that are in the Pioneer Network (www.pioneer.org.uk) we are part of at Revs. It was as ever great to see friends from around the nation who are trying to build the same thing we are here in Chichester. Some of the stories of what God building are truly incredible. Whoever says the Church is dying and irrelevant would not have been able to maintain that position for longer than a few minutes in that room in which we gathered as the stories flowed. It stirred me to keep building what God has called me to do.

As I drove to Windsor, a place I have never been before I was guided by a Sat Nav system which I asked to take me their as quick as possible. As I realised that I was entering the outskirts of Windsor I could not help but look to see if I could see the world renowned Winsor Castle. I had no idea where it was in relation to where I was. Then all of a sudden I glanced right to see the huge castle through an avenue of trees.  Although brief it was an awesome and dominating sight.  Hundreds of years of history stood in this monumental building of which I was sure I could only see a small section.

When I got in my car to come home my thought was to get out of Windsor ASAP as rush hour loomed large. I asked the Sat Nav to take me home via the shortest route. This meant weaving through the suburban Windsor. As I seemed to be getting to the edge of Windsor I approached another round about. As I glanced right to see if I needed to give way I realised I was at the entrance to Lego Land! At the entrance was a several massive Lego blocks stacked together looking like the start of a Lego tower being built.

I smiled as I unintentionally got glances from my car journey of the two places Windsor is known for. They were so different yet both captured my imagination the ancient and modern living in the same town. One was about ancient crafted stone work built by skilled masons. The other was a modern take on building that anyone could have a go at piecing together.

My thoughts then darted back to moments in my day talking about the growing partnership between Pioneer and the Methodist Church. The older and newer complimenting each other in the same space.

But more than that I had the challenging words of a parable from the end of Luke 5 shared as part of the day doing laps in my mind. It was about wine and its skins. In the new Church movement of the last two decades I have been a part of this has often been used to justify our existence and plans. However we often (as was shared with the leaders) conveniently leave out the punch line at the end because it is uncomfortable and requires a large dose of humility! ‘The old is better’. New wine is for new skins but the old is better. I love the co-existence of both the old and new in the same town complimenting one another.

Dan Blog: Who is doing what for whom?