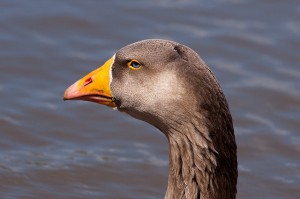 I was at my friends farm over the weekend and as usual witnessed a lot of wildlife. Now I am no Rolf Harris as I am not really into animals of any sort but the farm does fascinate me. The fine line between life and death is always close at hand on the farm. As we were relaxing the children came dashing across the field to let us know that the puppy and caught one of the geese from and had it in his mouth. My friend (and owner of the dog) dashed in the direction the children had just emerged from to try and save the goose. The goose in question was released by the dog eventually unharmed if not a little shaken.

Later on in the afternoon I was taking a stroll and saw the puppy on the prowl again! He walked nonchalantly towards the gaggle of geese feeding on the grass by a lake. They noticed him about 15 meters away and started to walk slowly away. He then gave chase. To my absolute surprise the gaggle just started to walk a bit faster. As the dog closed in this turned into a fast waddle. I could not believe that they did not take flight to escape the advancing dog! Eventually they tried too but it was too late. The closest goose just sat in submission as the dog arrived. The puppy had his second jackpot of the day and it was all to easy.

I could not understand why the geese did not fly earlier. After all it was what the were anatomically designed for and the dog was not! This would have lifted them out of the danger of the dog. It was their ultimate defencive move to the dogs offence.

It got me thinking about how often I act like a ‘stupid goose’ in the face of danger and challenge. I don’t see I am struggling quick enough and retreat to safety. Isaiah in the Old Testement paints a picture of Gods people ‘soring on wings like eagles’.

“but those who hope in the Lord will renew their strength. They will soar on wings like eagles; they will run and not grow weary, they will walk and not be faint.” (Isaiah 40:31)

Now I believe that God can rescue us out of challenging and dangerous situations but equally I have found his rescue in the challenging and dangerous place on many occasions. Being a follower of Christ in no means removes life’s challenges and pain (in fact it can amplify it, looking at the persecuted church around the world). How often do I forget that i can soar on wings like Eagles into my Father in Heavens arms to be rescued in my challenge and pain. His presence changes the whole landscape.

I am done with being a stupid goose!

Lou's blog: Finding my way back...